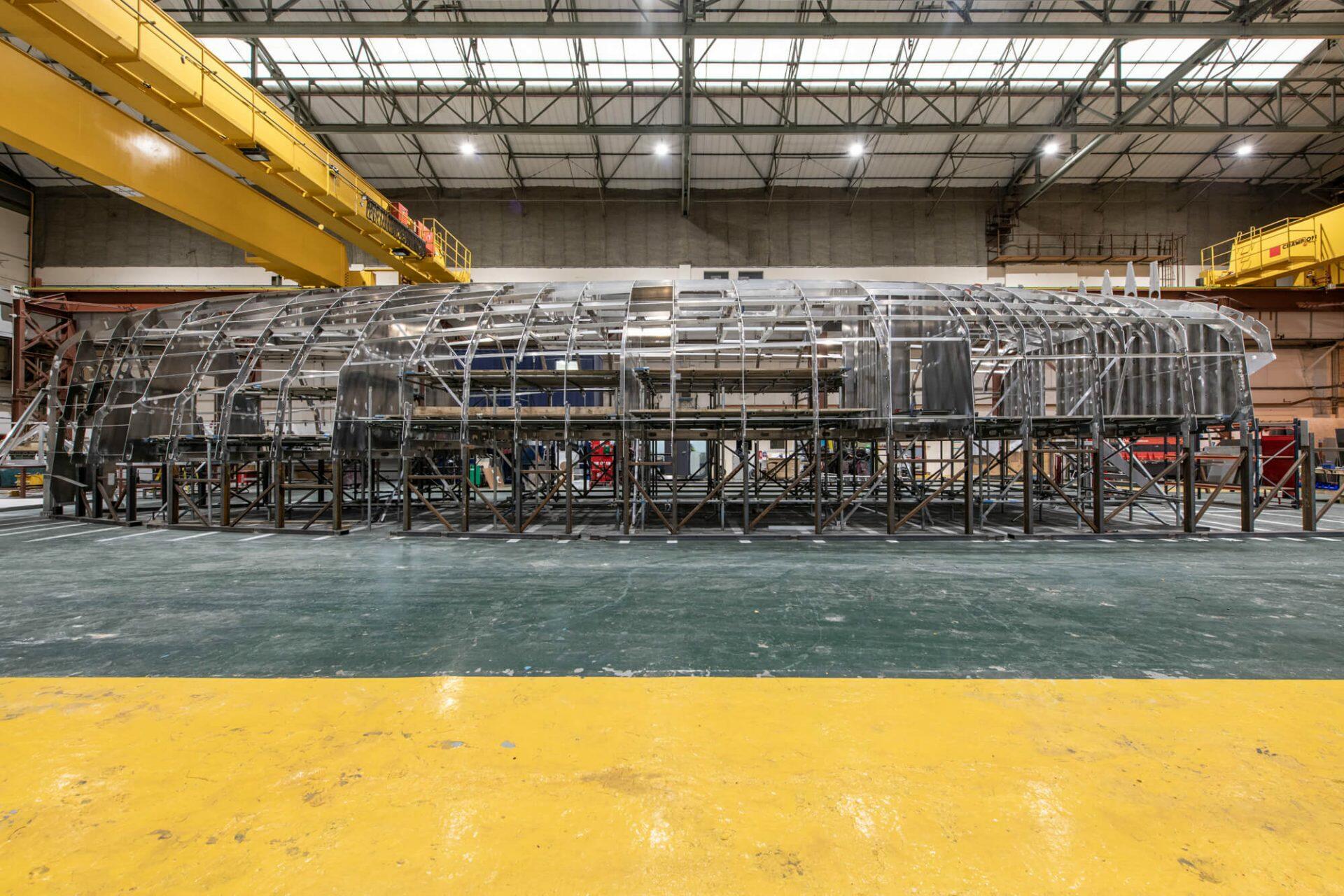 A modern explorer yacht should have no boundaries, which is why the complex structure at the heart of the Arksen 85 is designed for limitless adventure.

The cutting edge of modern yacht design is hidden below the surface. It is within the complexities of structural design that innovation sets apart the ultimate explorer boats from the other vessels on the sea.

The desire to create a go-anywhere vessel with a primary focus on sustainability and efficiency made the Arksen 85 arguably one of the most complex boat builds in explorer yacht history. Achieving a robust but light, hydrodynamically optimised structure using recycled aluminium is far from easy, yet by building to Category Zero of the MCA Work Boat Code – which follows the requirements of the Lloyd Special Service Craft class – this new vessel literally has no limits. 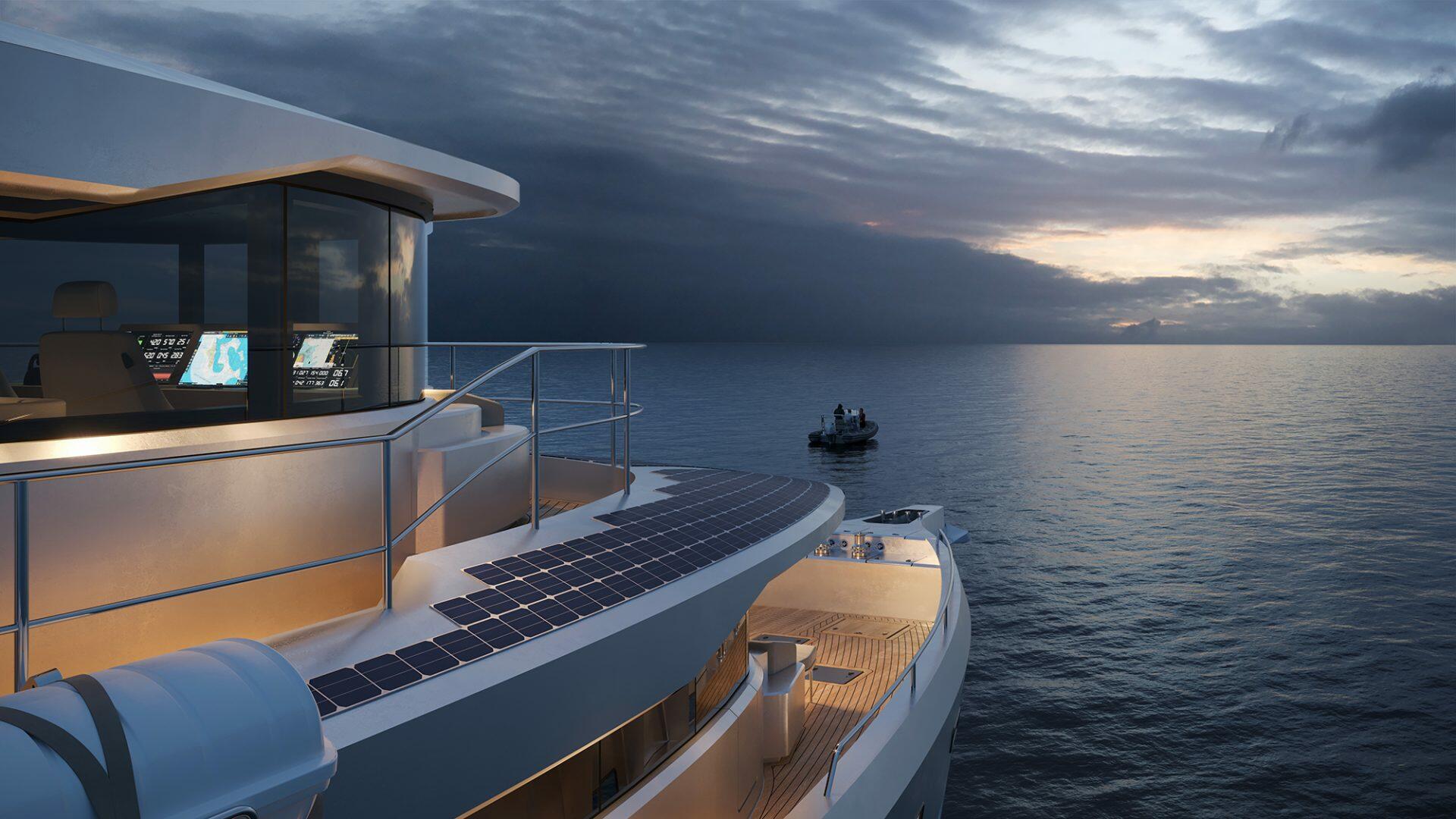 “It is designed to an unrestricted commercial standard, so there is no restriction on where in the world it can go,” says Arksen’s Technical Director Jim Mair. “Achieving that robustness alongside our other key criteria of operational efficiency has been all about careful optimisation of the structural design.”

Despite not having to meet specific class requirements due to the length of the vessel, Arksen chose to work to the highest levels of resilience, often even designing in excess of class requirements to meet the go-anywhere ambition.

“There are other aluminium explorer yachts out there of this sort of size that are not built to those standards, with a more economical use of structure,” explains Mair. “There are categories from three to zero, each with a higher level of stability and safety equipment to allow them to be more autonomous.

“The Arksen 85 is built to the same requirements as commercial patrol boats, fishing boats, work boats. That means, in terms of the rules and regulations, in the hands of a qualified captain and crew, it can go anywhere.

“If you are in high latitudes and have to navigate some light floating ice, you can do that. Likewise, if you’re going up an inlet, a fjord or a river somewhere tropical where you might encounter a tree trunk, it has the robustness to deal with that too.” 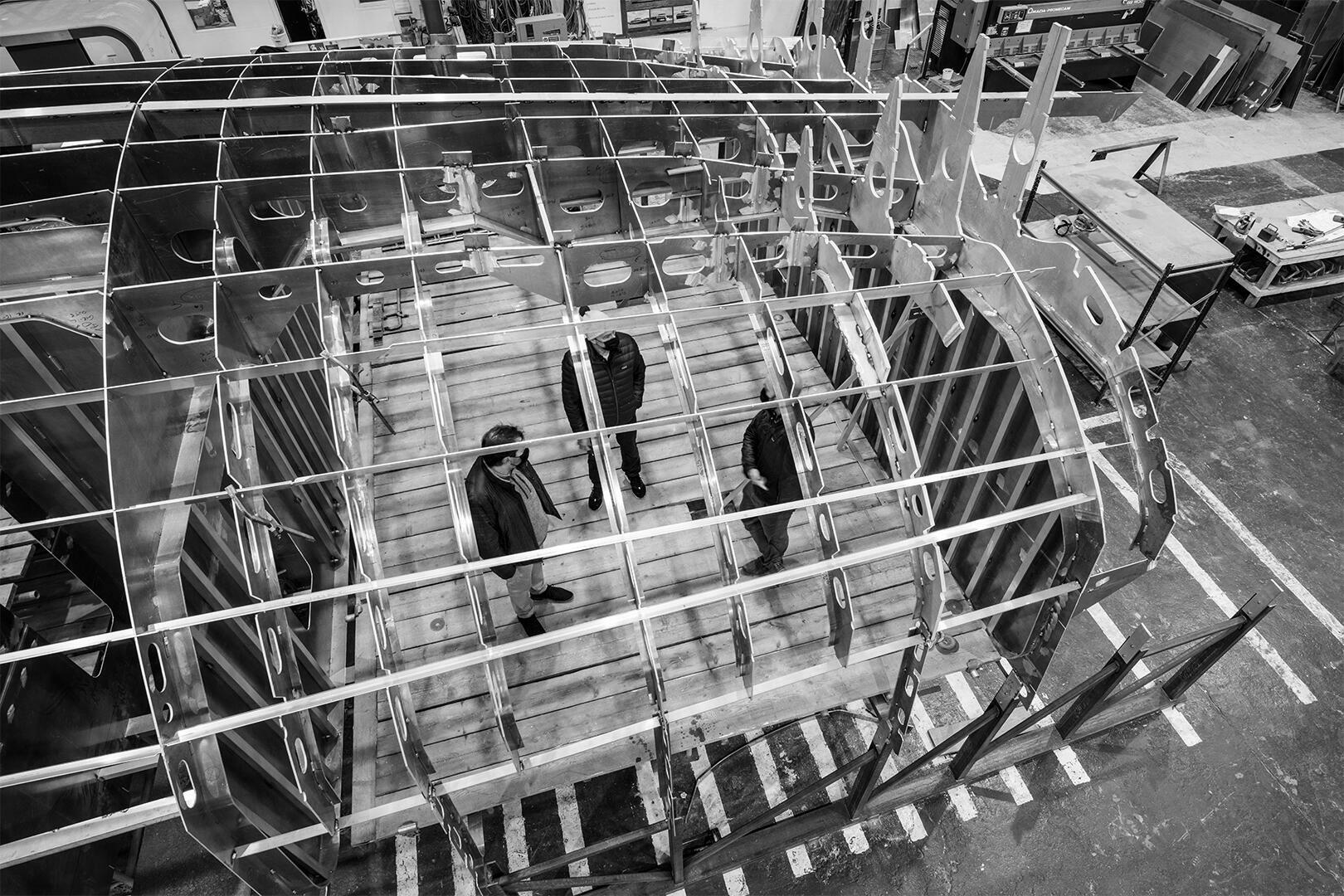 The desire to use sustainably sourced materials eliminated composites from the get-go, steering Arksen towards the use of recycled marine grade aluminium. The additional potential for robustness within design this offered was an added benefit that the designers used to its maximum potential.

Mair explains: “Composites would have been an easier route in terms of build efficiency, but aluminium has the sustainability elements and also the general robustness and reparability from an it service point of view.

“If someone’s willing to go off grid with this into areas that potentially might have higher risk of collisions with floating objects or might require them to come alongside some gnarly keyside in a remote land, aluminium is tough. It’s more resilient and also more straightforward to repair than composite.”

The focus on efficiency meant it was not possible to simply load up the structure with more metal to toughen it up, however, so the use of priority thickening within the skin and localised strengthening within the skeletal structure was key to achieving those high levels of robustness.

“Compared to other boats that are built from aluminium, we have gone for a more significant level of structural strength all round,” says Mair. “However, the boat was designed to be efficient in a certain displacement band, so in terms of the structure, that had to be balanced against that weight to sit at that height.

“The hull is there to keep the water out, and having thick plating is all about impact strength. The internal structure is what holds the shape of that hull, so making that stronger helps it resist bending, distorting and denting.

“That is supported by a level of internal structure in excess of requirements in many areas. The structural members attached to the hull are thicker than the requirement and some of the spans between members are closer in areas that need to be more protected.

“Also, in the bottom of the boat, where we have a lot of tanks for diesel, water, etc, these are integral to the structure of the boat and achieving the required tank capacities has had a defining effect on the structure.” 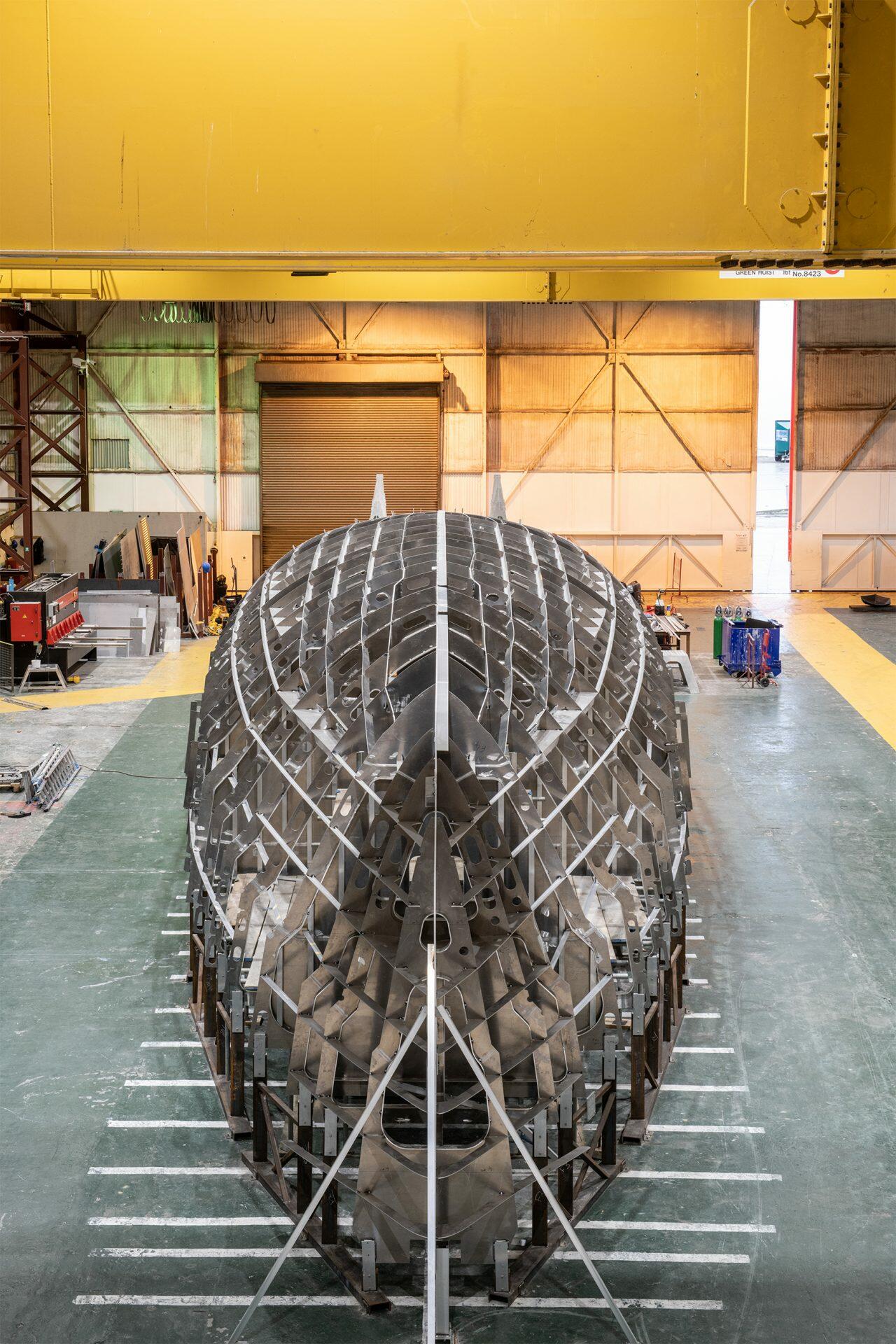 The boat’s designers come from a background in the commercial sector, where requirements are typically focused on achieving stronger or lighter craft. That led to significant levels of computational structural analysis being used, particularly in higher load bearing structures, to optimise these two aspects.

However, it is in the shaping of the hull where Arksen is doing something “quite different” by implementing highly complex double curvature within the aluminium structure, to optimise flow through the water in many different conditions.

This has enabled the vessel to significantly reduce fuel consumption compared to others in its class, with the energy required to propel the boat along at slow speeds, Mair says, being “almost equivalent to a couple of kettles.” However, it has also made the structural design and build process extremely complex.

“On a composite boat, plenty of double curvature is easy to deal with because it’s moulded, but on an aluminium boat that all needs to be formed,” says Mair. “For boat designs where efficiency is less of a concern, it’s very easy for the hull to be heavily influenced by efficient build processes but that is not our approach.

“Our main priority has been the most efficient hull shape, so the build processes and structure have had to follow that. That adds time and cost to the build process, but ultimately it achieves a better boat.” 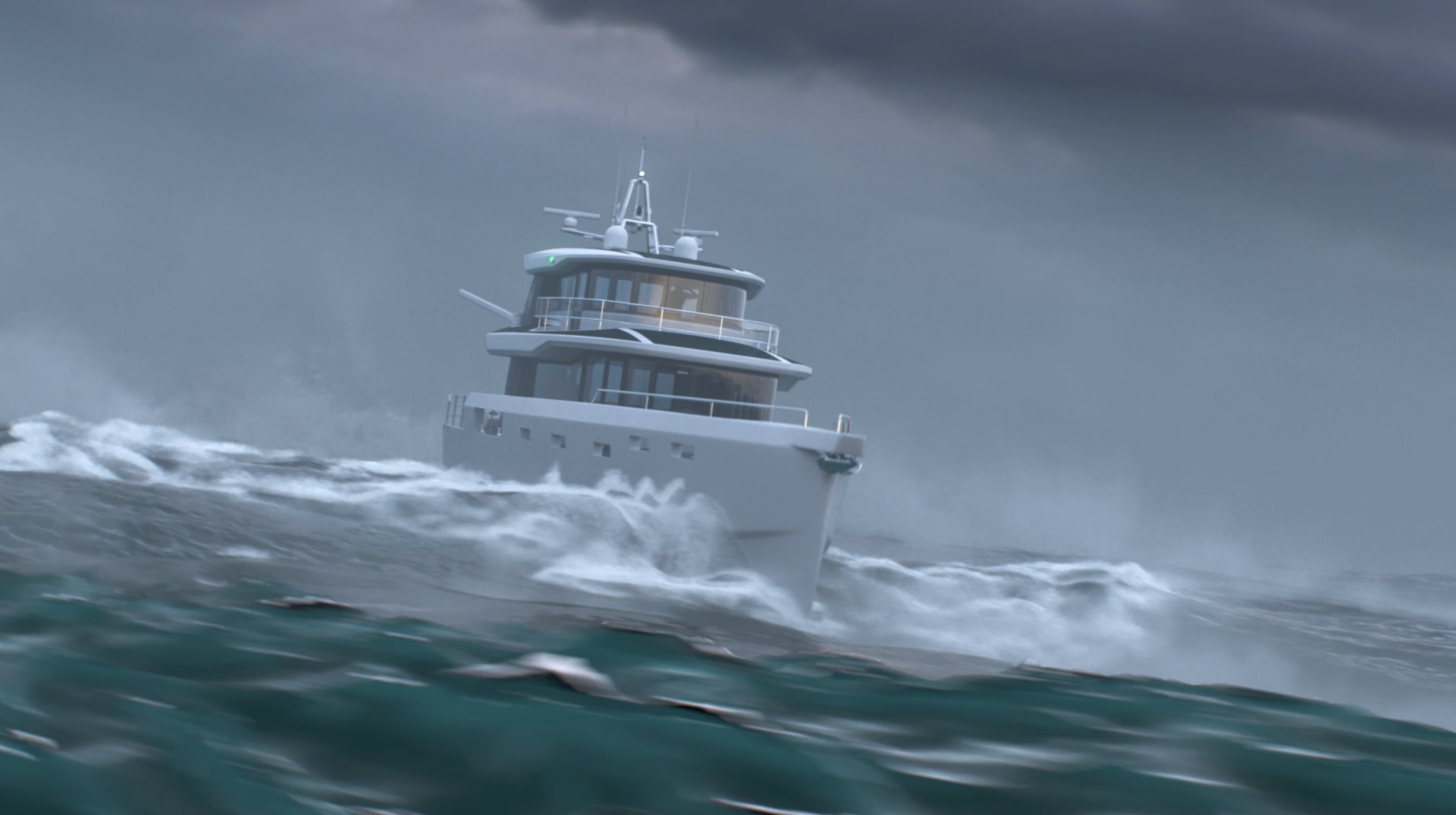 Those challenges have been overcome through innovative thinking, which have included the development of a bespoke computer programme to extract 2D manufacturing data from 3D files and the use of Snijtech cutting kit to eliminate human errors from the construction process.

“There is still a very manual element to manufacturing,” explains Mair. “It’s not just a case of putting a piece of material in a machine and programming a CNC to do the curvature, there is a process of templating and rolling, and that to do that accurately is a real art.

The structure has also been designed to have a grounding capability, enabling the boat to be beached in remote locations so that it can be worked on at high tide if necessary. This in itself has added complexity to the design, but is all part of delivering on that go-anywhere premise.

“If you’re in a remote part of the world and you’ve damaged the propeller blade or something and need to work on the boat below the waterline, you can beach the boat, let the tide go out and do your work,” says Mair. “That’s not common on a boat of that size.

“People do it with sailing yachts because they can sit the boat on its keel and lean it against a quay wall somewhere. You can do that with the Arksen 85 by sitting on the structure at the aft of the boat, where the prop shafts come out. We did a high level of computational analysis to achieve that.

“It just comes back to this general robustness and reparability. For people who go long-range cruising, the threat of collisions with floating objects is a distinct reality – so this extra robustness gives them the peace of mind that they have a higher capacity to cope with anything they come across.”